Joe Duke replied to Hannah goslin's discussion Moving boxes for sale
"Hi Hannah, Great you still have the box, are they new or have they been used? just want to make sure they are sturdy ones. I can come by today or tomorrow if that works for you? "
10 minutes ago

Flats for sale in the Golden Lane Estate

HiI live in the Barbican at the moment but would like to move to the Golden Lane Estate.If anyone is thinking of selling their 1 or 2 bed flat please would they let me know. My name is Toby and anyone who would like to discuss selling their property is welcome to contact me directly on 0739 254 8064 or by email at toby@tobyorford.com.Thank you.RegardsTobySee More
yesterday
0 Comments 0 Likes

The Traditional Service of Lessons and Carols - all are welcome!See More
Saturday
0 Comments 0 Likes

Hannah goslin replied to Hannah goslin's discussion Moving boxes for sale
"Hey Joe yes I have 11 small-medium left and 3 wardrobe ones. I'll be around this weekend if you want to come get them? Be great if you have exact change please"
Friday 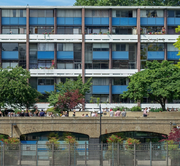 Export to Outlook or iCal (.ics)

This will be a special evening appealing to architects / designers and those interested in the built environment as well as photographers.

Andy is a freelance photographer who undertakes commissions for architects and other clients across the UK, Andy is a member of the Association of Photographers and has worked with blue chip companies like BT, Native Land and numerous architectural practices including HLM, Fielden and Mawson, AD Architects, Coda and Steffian Bradley.

He also undertakes personal projects for exhibition.  Most recently 'Ecocities' which was featured in the Telegraph and Evening Standard and 'Suburbia' which was shown at Photomonth. He also exhibited at last years Royal Summer Show.

To help us cover costs a suggested donation of £3 from non members who attend a meeting will be gratefully received.Tea Coffee and a biscuit's will be provided

This events will be held at:
6.45pm, City YMCA, 8 Errol St, London, EC1Y 8NX - alongside Waitrose just north of the Barbican Centre.