The Traditional Service of Lessons and Carols - all are welcome!See More
14 hours ago
0 Comments 0 Likes

Hannah goslin replied to Hannah goslin's discussion Moving boxes for sale
"Hey Joe yes I have 11 small-medium left and 3 wardrobe ones. I'll be around this weekend if you want to come get them? Be great if you have exact change please"
yesterday

Joe Duke replied to Hannah goslin's discussion Moving boxes for sale
"Hi Hannah,  Do you still have the boxes for sale? I am looking for some as I am moving out sadly of Great Arthur House at the end of the month.  Best, Joe"
yesterday

Hello all. Some of you might know that I was on Saturday's beautiful market in the community centre selling my dad's art crafts and fundraising money for this this amazing cause to a UK-based charity helping kids in rural areas in my beloved Venezuela. If you donate today of before 5am tomorrow, a big charity in the US, called Global Giving, will match your donation.Happy #GivingTuesday and thanks a million!See More
Tuesday
0 Comments 0 Likes

'Gagging' of our resident Common Councillors

In April the Court of Common Council was presented with a petition signed by over 1,100 City residents declaring 'no confidence' in the City's standards regime. The key issue being that resident Councillors are not able to represent their constituents on matters which affect their constituents no less than themselves without obtaining ‘dispensations’ that are widely refused. READ MORE

This was first announced via local press and TV in December, much to the surprise of many local residents as there has been no consultation. There are concerns that there will be unwelcome consequences for the area which will affect the live and health of the local resident community.

A resolution was passed at annual wardmote in March 2019:

“It was Resolved that the City of London Corporation commission a study reporting in no more than one year regarding pedestrian flows through the Golden Lane Estate ("GLE") resulting from current and anticipated property developments in the vicinity of the GLE and consult with GLE residents regarding the current "private" status of the GLE as a result of which residents pay for the maintenance of areas of the GLE that are in practice open to the public.” 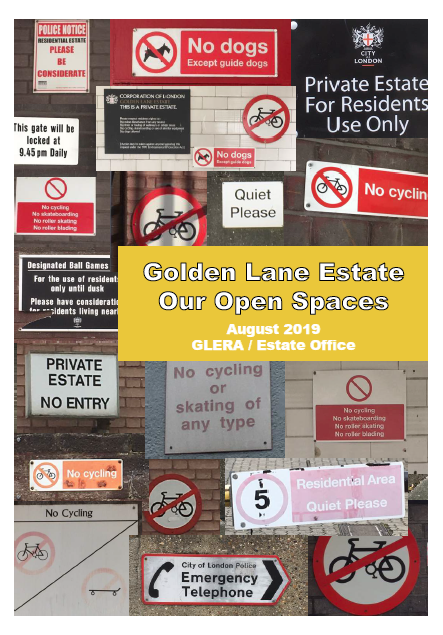 In May 2017 the City agreed to undertake an assessment of the proposed area.