Hello, Just wondering what's the best course of action for this. I live in Hatfield House and over the past week or so someone has been listening/watching TV extremely loud ( I believe he is on Crescent House) I can see the windows open and where the sound is coming from but no idea what house number etc. It starts at 9am all the way till 1am, I don't know what to do. Thank you See More
18 hours ago
0 Comments 0 Likes

We were appalled that the wonderful Crescent House walkway gardens have been destroyed.  Below - a photo taken recently in Stanley Cohen.  It shows a row of little plants, not placed on the walkway itself but on the recessed concrete strip into which the railings are set.  With these few plants we were trying to soften the prison-like appearance of the decaying stairs and common parts which are shared with Bayer House, without them getting in anyone's way. 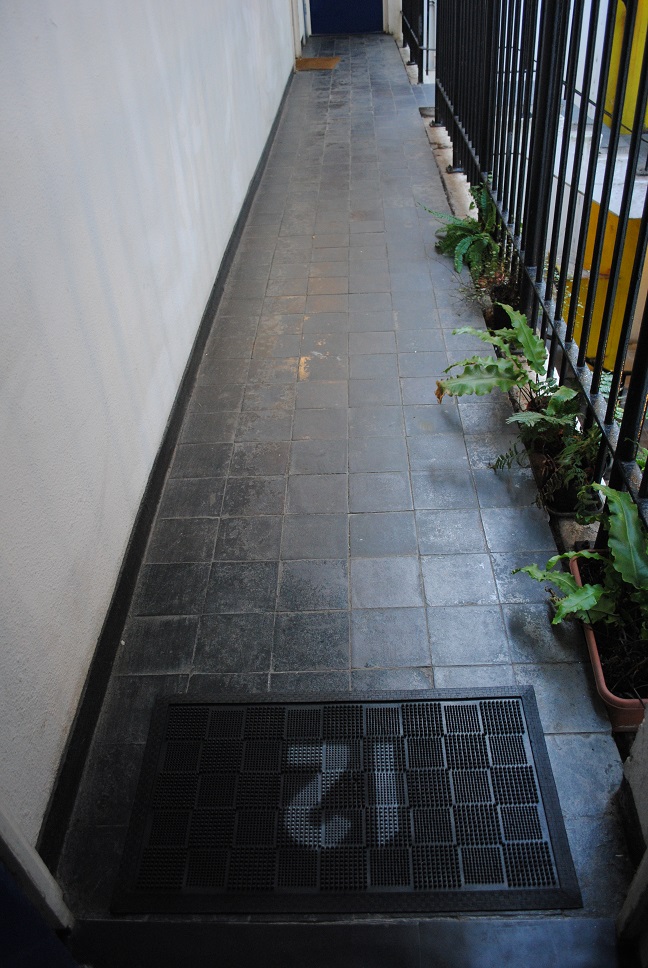 But we have now been made to remove them for the following reasons:-

1) Fire safety. (But how could they impede anyone's escape?)

3) They prevent the gutter from being cleaned.  (In fact we had to clear the gutter and un-block the drain before putting the plants there).

4) They would interfere with future redecoration  (The plants take 5 minutes to move).

5) We did not have permission.  (True, we didn't realise it was needed)

Apparently the plant-removal directive was not initiated by the Estate Office but has been issued from a more remote source.  Does anyone know who dictatorial plant-phobe might be?

And thinking about Fire Safety, here's a photo of some of the many cables that festoon the same stairwell..  If there were a blaze, wouldn't these plastic-covered electric wires ignite more readily, and pose a greater danger to escaping residents, than any plants? 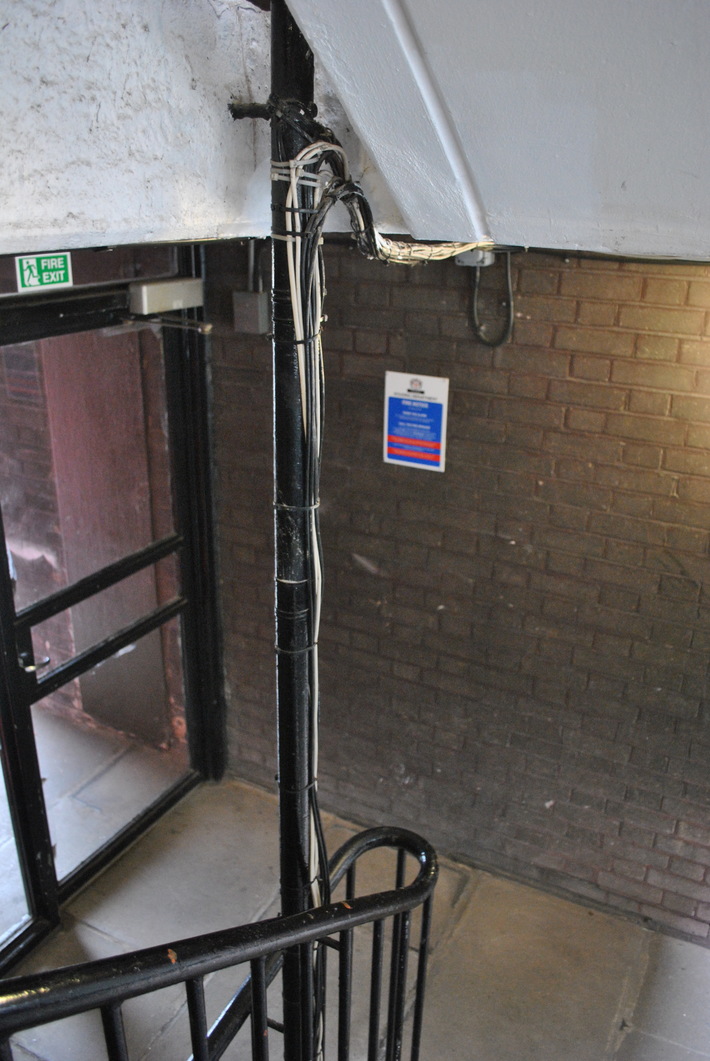 Hello Brigid.  I know exactly how you feel.  I live in Crescent House, and in November 2017, the City forcibly removed my garden, even though it was established later that it was not a fire risk by 2 independent expert companies.  As a result of what the City did  I spent 2 weeks in hospital, and have also spent more time there for at least 3 other times, due to the City's treatment of me.  My possessions have since disappeared, and the City refuse to tell me what happened to them.  About a year later, they started to remove other people's plants, and place them by the tennis courts, in a sad attempt to make out they were not discriminating against me, even though it is clear they were, as my garden was the only one taken by force at the time.  I am taking legal action over this, as the City said they would mediate with me, but so far have ignored my solicitor's letters on this,  and also there are residents in Crescent House who are involved in mediation etc to solve the issue.  I say to you, do not despair, as all is being done to settle the matter.  I also agree with you that vital safety issues, such as the one you highlighted, have been ignored in this.

It is proven that plants are an essential therapy for helping with stress, and general well being.  My garden was vital for the wellbeing not only of myself, as I suffer psychological illness, but that of my partner, who has Dementia.  He loved sitting outside to look at it, but now there is nothing to look at. My neighbours are also angry over its removal. They loved the garden, and I had many lovely compliments about it from guest flat users.  My beloved mother, who is now dying in a hospice, also was heartbroken when she saw how the loss of my garden affected me, and, always talked about it, including when she went into the hospice. Her only wish was to help me get the garden back.   I am devastated and just want what is right for everyone.  We, as residents, have the right to say what we want, and should be listened to.

Hello Brigid again.  I just wanted to add a few more comments on your discussion post.

If the plants are impeding fire escape you need to be provided with a report from the LFB, or an expert in fire safety to confirm this.  Have you been provided with any such report?

Concerning the cleaning of the railings, and any future redecoration, firstly, I can never recall in the many years I have lived here that anyone has cleaned the railings, and, it is noticed that some other parts of Stanley Cohen, and other blocks, have plants by railings, which have been allowed to stay.

As for not having permission, I clearly recalled when I moved in nearly 30 years ago, that permission was granted for plants, and, in fact encouraged.  I don't know how long you have lived here, but for many years the City held Gardening competitions over their Estates, and actively encouraged plants and gardens, and many prizes were awarded.  I know, as I received some prizes, and letters, clearly asking me to continue in providing beautiful garden displays.

Finally, as you say this was not initiated by the Estate Office, but a more remote source, which may indicate that of someone in higher authority.  Either way, you have the right to know who it was, so you can address your concerns that that person directly.  It appears that this whole issue about plants has been handled badly, and in a very inconsistent approach.

Hello Maria,  It's good to hear from you - I read your earlier post about the plant removal from Crescent House and was appalled.  We've only lived here for a year, and have already had experience of the extraordinary beaurocracy that seems to affect everything on this estate.  When we'd been here just a couple of weeks we found that a big window pane in our bedroom was sliding down because the wooden frame was rotten - and it was directly above a public walkway!  While the Estate Office was quick to have the window boarded up to make it safe for pedestrians, it took months for the boarding to be removed and the window repaired.  So many agencies were involved, and there seemed to be little communication between them.

Maybe something similar is happening with the plants.  Since the Grenfell tragedy everyone is extra fire-aware.  It seems (though I may be wrong here) that all the Estates owned by the City, apart from the Barbican, are administered by the same labyrinthine organisation.  This has led to a proliferation of Managers, none of whom has much knowledge of individual estates.  So perhaps a Manager, or perhaps a high-up Committee, without any direct contact with Golden Lane, has decided "plants constitute a fire risk" and has sent down a directive which the Estate Office has to administer.  We now need to discover why LFB Fire Assessment Reports and Solicitors' letters are being ignored; perhaps they're being pushed from desk to desk?  Whatever the cause, it's disgraceful..

My husband David Curtis and I intend to go to the Ward moot on March 20th, but have little idea of the kind of issues raised at these meetings.  Can local residents raise issues in advance?  - We need to get the plants back A.S.A.P!

(P.S.  I want to change the name I first put up on the GLERA website (I'm always known as 'Biddy' and usually use the surname 'Peppin')