I’m really not sure why CCTV camera’s are in the garages, it’s not stopped fly tipping! If anything it’s worse.   I don’t call this progress and looking after the environment.   Nothing is being done to prevent this.  See More
Thursday
0 Comments 0 Likes

Here are the links:Report Anti-Social BehaviourGLERA Mould SurveyBeech Street ProposalsRead summary from October's GLERA meeting. If you have any questions or would like to join the GLERA committee email Jacqueline at secretary.glera@gmail.comSee More
Jan 23
0 Comments 0 Likes

All Golden Lane residents  are invited to join our Cripplegate Councillors and new Alderwoman for a glass of wine at St Giles Church on Wednesday 1 February at 7 pm.It's also an opportunity for them to update us on Committee activities and answer any other questions we may have. There will be short presentations and question and answer sessions with representatives from the City’s Climate Action Strategy and the Green Doctors scheme, a charity that offers free and impartial advice to help residents stay warm, save money and live greener (an initiative sponsored by the Corporation).Please come along!See More
Jan 21
0 Comments 0 Likes

I live at 4 Basterfield House, opposite the CoLPAI site. I was at home on Friday morning (7th December) when I felt a shock pass through the building - it felt like a momentary earthquake. I looked out my bedroom window at the site and saw two diggers working on the CoLPAI site near the red hoarding. There were other vibrations after that, as the diggers were using a percussive drill to break up the concrete slabs on the site. I could hear the china and glasses in my cupboards rattling with the vibration, and later I noticed one of the glass panels in my internal screen wall had cracked. I took a short video of the diggers working.

Later that Friday evening at 7pm I went to fetch my car from the garage and as I walked outside I thought I smelt gas, but it was very faint and I assumed that it was from the clay ground that they had uncovered on the CoLPAI site. We left for the weekend and the next thing that I knew was that my phone lit up just before lunch on Saturday. It was my neighbour - where was I? was I in the flat? I could hear her trying to stop emergency workers from smashing my windows to get into our flat. By then the gas had been isolated, but as we were directly above the leak our flat had been filled with potentially explosive gas and needed to be ventilated immediately.

I was a couple of hours drive away from London, but I rang a friend who keeps a key and she jumped straight in a cab. In the next thirty minutes I had calls from the police, friends and neighbours. A locksmith was called to try and open our locks, but had only half managed that when our friend arrived with the keys. The locks no longer work properly, but at least they door wasn't broken down and that is insignificant compared to everyone's safety and what might have happened...

This morning there is a yellow line with the word ---GAS?--- painted on Basterfield Mews that leads from Basterfield House to the CoLPAI site. I went into the undercroft and sure enough there is an old  cast iron gas main that is clipped to the ceiling there, and underneath my flat it appears that it branched off just under the road surface towards the CoLPAI site towards where the diggers had been excavating.

This morning I checked the Utilities Survey produced by Peter Brett Associates as part of the planning application and this gas line does not appear on it. 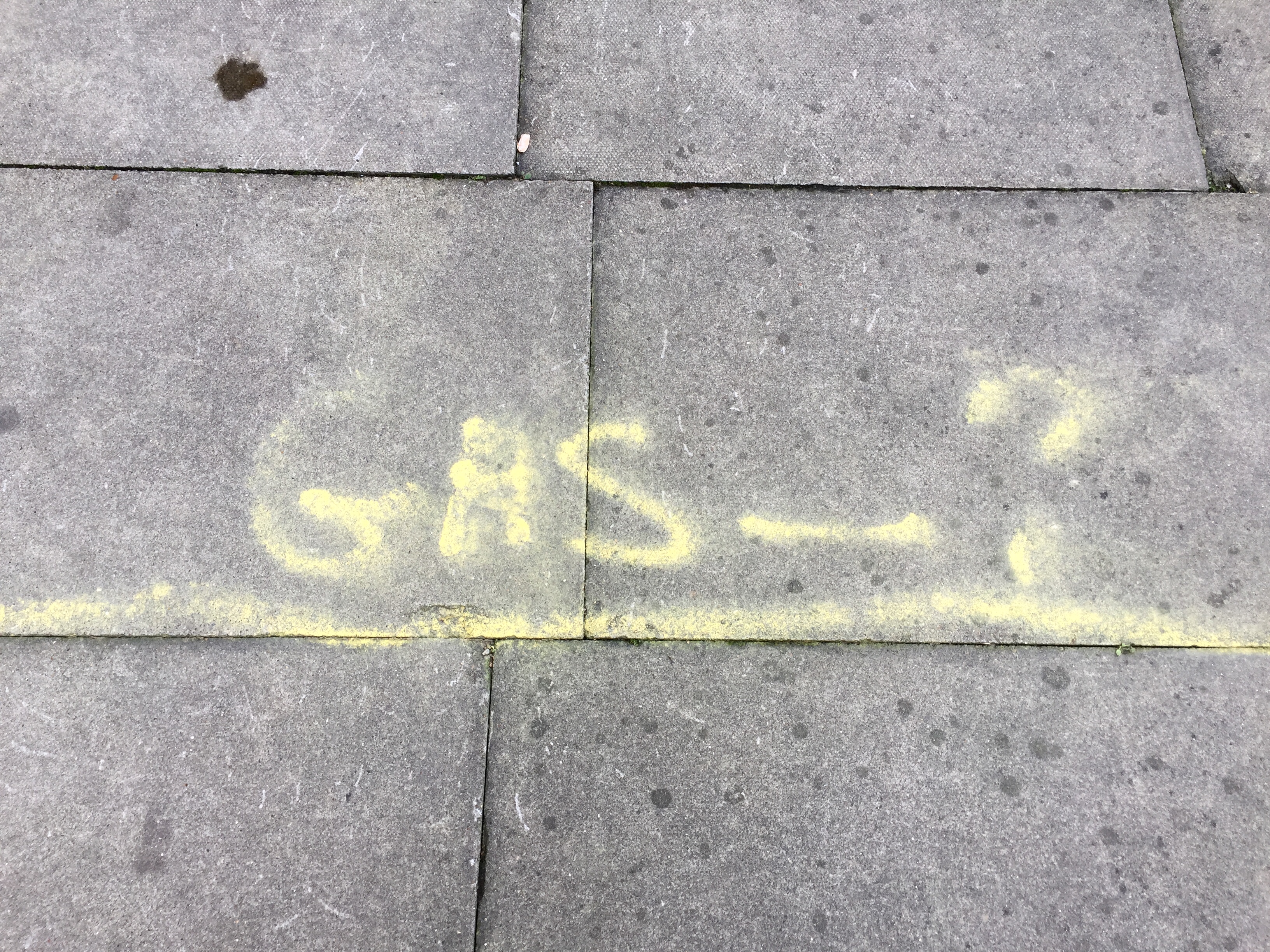 I emailed all the members of the COLPAI liaison group together with our councillors on behalf of GLERA on Sunday morning. My email is below:

Dear Steven,
As you may be aware Basterfield House, Bayer House, the Community Centre and the swimming pool all had to be evacuated early on Saturday morning because of a gas leak. It would appear that this may have been caused by something that was dropped on site on Friday with an impact that was described by residents of Basterfield as resembling an earth tremor and which may have dislodged the joint of a gas pipe.

Clearly this is a serious incident which, quite apart from the risk of an explosion, lead to several residents vomiting because of the fumes and many having to leave their homes in their nightwear on a cold and wet morning and stay away for over four hours

Presumably the incident on site has been reported to the HSE and no doubt that we will be informed if they start an investigation and I would be grateful if you could confirm that this has happened.

I would also ask that you immediately organise a public meeting so that residents can get an understanding of the cause of the incident on site and how this may have led to the gas leak, what measures will be put into place to stop it happening again and what mitigation measures will be undertaken when works that cause vibration are taking place. Could I also ask that this meeting is attended by a contractor representative, the site manager, ISG’s health and safety advisor, a client representative and their Principal Designer.

It would also be useful for representatives of the housing department to attend to explain why no one from their department was present to give advice to residents.

Because of the seriousness of the situation I would be grateful for an immediate reply and the meeting to take place this week.

I received a rather unsatisfactory answer saying that affected residents would be written to soon and that they would not organise a meeting to answer peoples questions. The question about whether the Health and Safety Executive had been notified was not answered. I replied with the following email:

Thank you for replying but but that is not an acceptable response. If there had been a explosion the City would have been looking at millions of pounds of possible damages and quite possibly loss of life and another Ronan Point.
I have personally taken in Residents yesterday, several had to seek accommodation in the pub and it was not well into the morning that a respite space was established in the Golden Lane Campus. Clearly there was no planning for an incident and there were no preparations by the City in place.
Writing to affected residents is all very well but there needs to be a public forum where their questions can be answered. The City also needs to devise and publish a plan for incidents of this sort.
You do not answer my question whether the HSE had been notified of the incident on Friday. I would be grateful for a response on this point.
Lastly this raises the whole question of whether is is appropriate to have gas supplies in multi-storey blocks of flats and whether the City should have replaced the heating systems with a communal system rather than new individual boilers.
Yours,
Tim Godsmark
I have received no answer to this email. I have had a supportive email from Alderman David Graves in reply to my first email and it was good to know that he was present on Saturday morning.

The gas engineer who was called out to repair the leak apparently thought that the pipe was damaged through vandalism. There doesn't appear to be any substantiation for this. There is no sign of any forced locks in the undercroft or other damage, other than the regular lack of maintenance. In the years I have lived here there has never been an issue of "vandalism" in the undercroft, and it beggars belief that anyone would have chosen to try and damage a gas pipe, rather than break into a storage locker and that it should happen at the exact time that demolition works were going on in line with the gas pipe and a few metres away from Basterfield House.

Nevertheless the demolition contractors were on site this morning and trying to justify their actions and dampen any speculation. When I queried it and showed them the video of the diggers they even asked me how I knew there was a pipe there at all - I had to point out I am only going by the yellow line on the ground with the word "GAS?" on it. I think a precautionary working hypothesis is that the pipe was damaged by the demolition works, and we should proceed on that basis until the cause is confirmed.

Hi have just received an email from the Director of Communities and Children's Services say the the Health and Safety Executive have been notified.